The Sun has got his hat on hip hip hip hurray!

This is the hardest thing I have ever had to write.  To let those of you that have stayed with us at Cresswell or read about our campsite.  My dear father (Pops) passed away on November 26th, he was 95.  For the last 6 years he had shared our home as part of our wider family.

Writing this I cannot hide the emotion I am feeling as I try to put into a few words a little about my father. 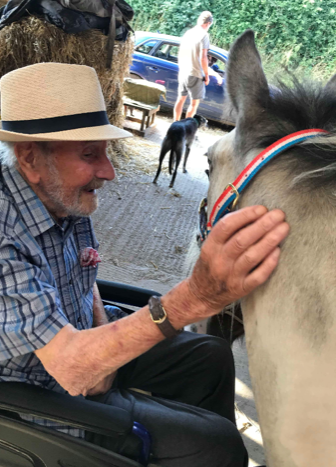 Pops seeing how Bluebell is progressing. His love of horses has been with him since the days he took the shire horses out into the fields as a young lad.

It was the passing of my sister, Pops’ first child, that I could see he was really struggling living on his own.  With our blessing he moved into our home.

It did not take long before he made himself helpful.  Turning his hand to trimming leeks, picking vegetables, bagging potatoes, making a potting shed for me, amongst other jobs.

He loved the seasons and the flowers in the garden that emerged each passing month.  He clearly relished his long life as every day he would say ‘Beautiful Day’.

On one occasion when we were sitting in the garden having a cup of tea, Pop turned to me and said, ‘Whilst there may be those of us that don’t believe in God, it is impossible to look across this green and pleasant land and not feel the touch of some higher presence in its creation’.

Getting to know Pop again

I was lucky enough to get to know Pop all over again as he began telling me of his early years, which of course included his time as a Glider Pilot during World War II.  Seeing active service landing his Horsa Glider at Arnhem, ‘Bridge to Far’.

Following the war, he had not had cause to return to Arnhem, but with a little persuasion from myself and his old friend Des (also a veteran of Arnhem), the adventures began.  How he enjoyed it, with me going along as his companion.

Pop was clearly proud to be able to explain the events of September 1944 and listening to him talk to his great friend Des, I couldn’t help but be entranced by the depth of the friendship they held.

These visits to Holland were to become a regular occurrence and it was during these while talking to other veterans and historians that I began to realise that the Glider Pilot Regiment was unique.

It was like having the trump card in a Poker hand, other soldiers would shake their hands, people would come up to me and say how proud I must be, they would want photographs with Pops, children would give him flowers, ask him to sign anything so they had both his and Des’ signature. 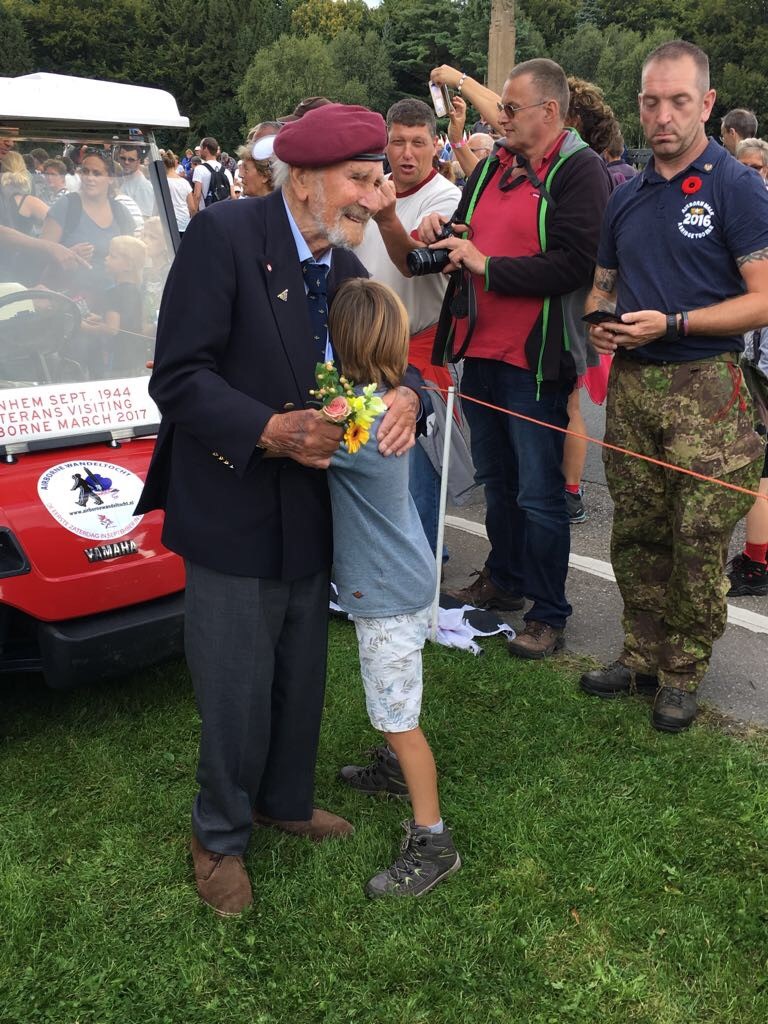 Pops receiving a posy and a hug from a small child in Arnhem. Thanking him for his service in September 1944.

The memories of visiting Oosterbeek Cemetery and watching Pop as he silently paused in thought, he would put his hand on the headstones of his friends that didn’t come home.

Memories that I will cherish, not least our last trip, leaving Bridge Meadow in a helicopter in June to attend the funeral of his dear friend Des. 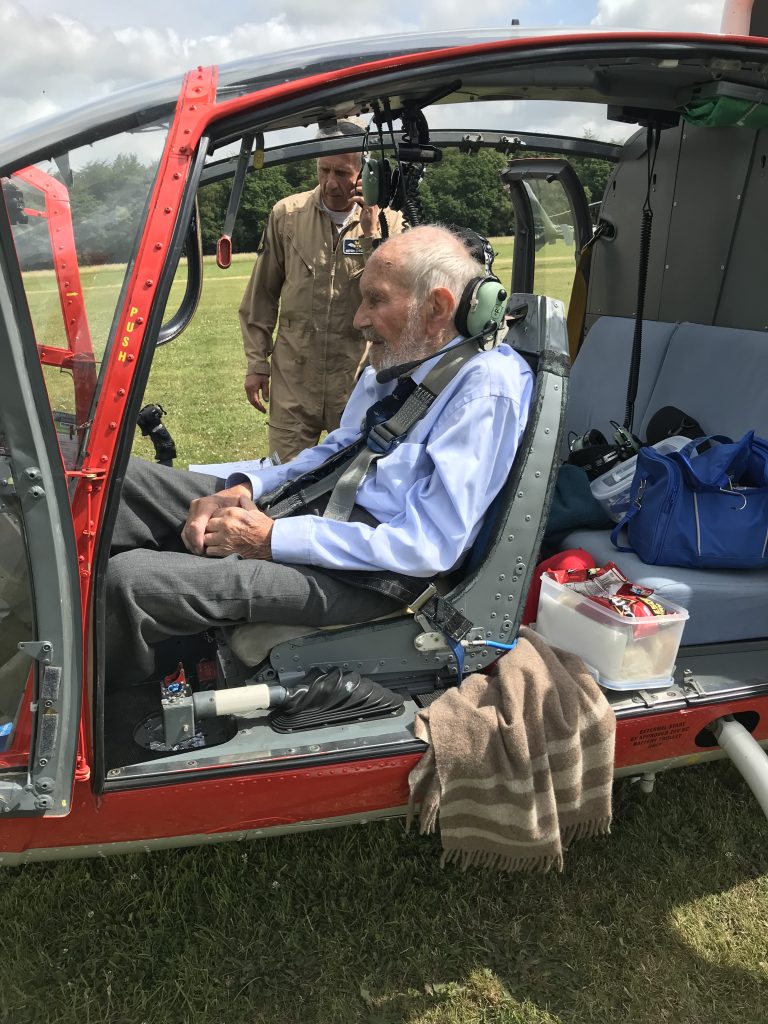 Pop gave me so much encouragement in the early days when thinking of starting a campsite in the Meadows.  He had often walked his dog down the Meadows, and we spent many an afternoon sitting and chatting on a bench I put down overlooking the river bank in Bridge Meadow.

He had always said what a ‘special’ place it was, and when we talked about the idea of a campsite and I worried if anyone would want to stay, he said ‘They will come, because it is such a beautiful place’.

He relished his last job as Secretary of Cresswell Barn Farm Campsite.  Every summer’s day we would have the conversation of if I was going to be outside, how many hook-ups were available, any room for tents, where was the phone for him to take names and phone numbers.

He loved looking across the garden to see the Meadows come alive with the sound of children playing, campers sitting outside relaxing and enjoying the surroundings that were theirs for their stay.

In the evenings he could see the figures of campers sitting around the fire pits chatting away. 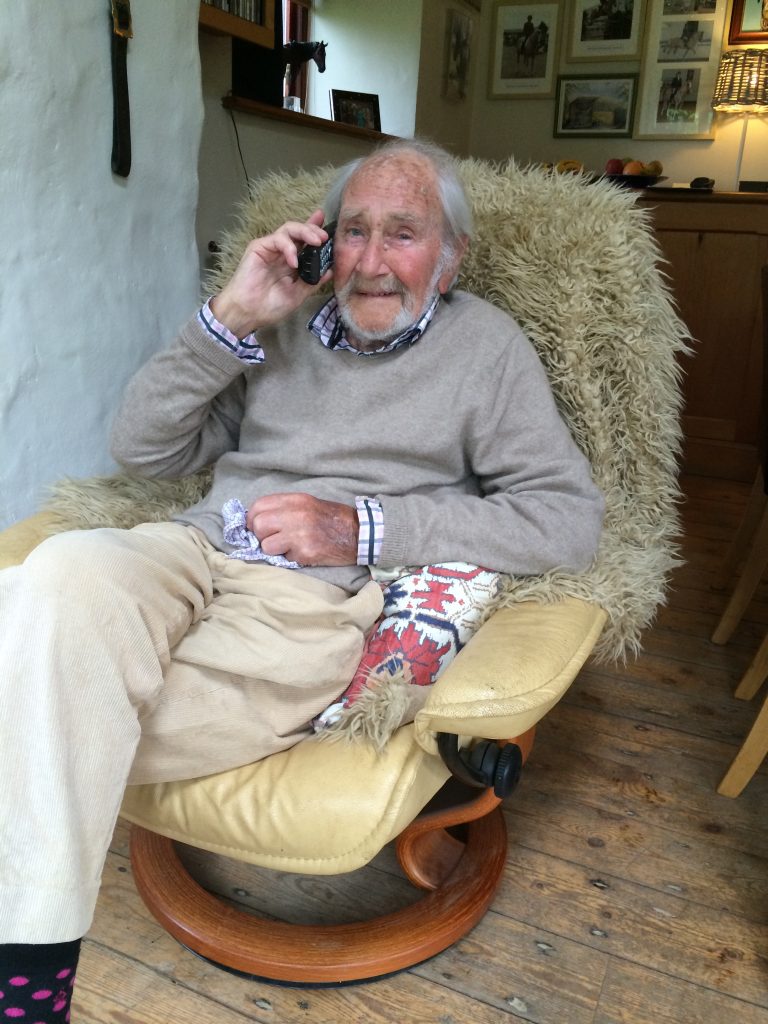 Pops… on the phone booking in a camper. He was the oldest receptionist in Wales!

Pops’ favourite time of year was the summer, and as he got older my memory is of him sitting on the decking with his sun hat on, listening to the birds and looking across the garden down to the Meadows will always be with me.

He loved the flowers, he loved the birds, he loved life.  I miss him terribly, the true extent of which will no doubt truly hit home in the days and months to come.

For us all to remember Pops I think it fitting that Pitch 6 will now become Pops’ Corner, and when any of us sit overlooking the river we will all think how lucky we are and say ‘Beautiful Day’. 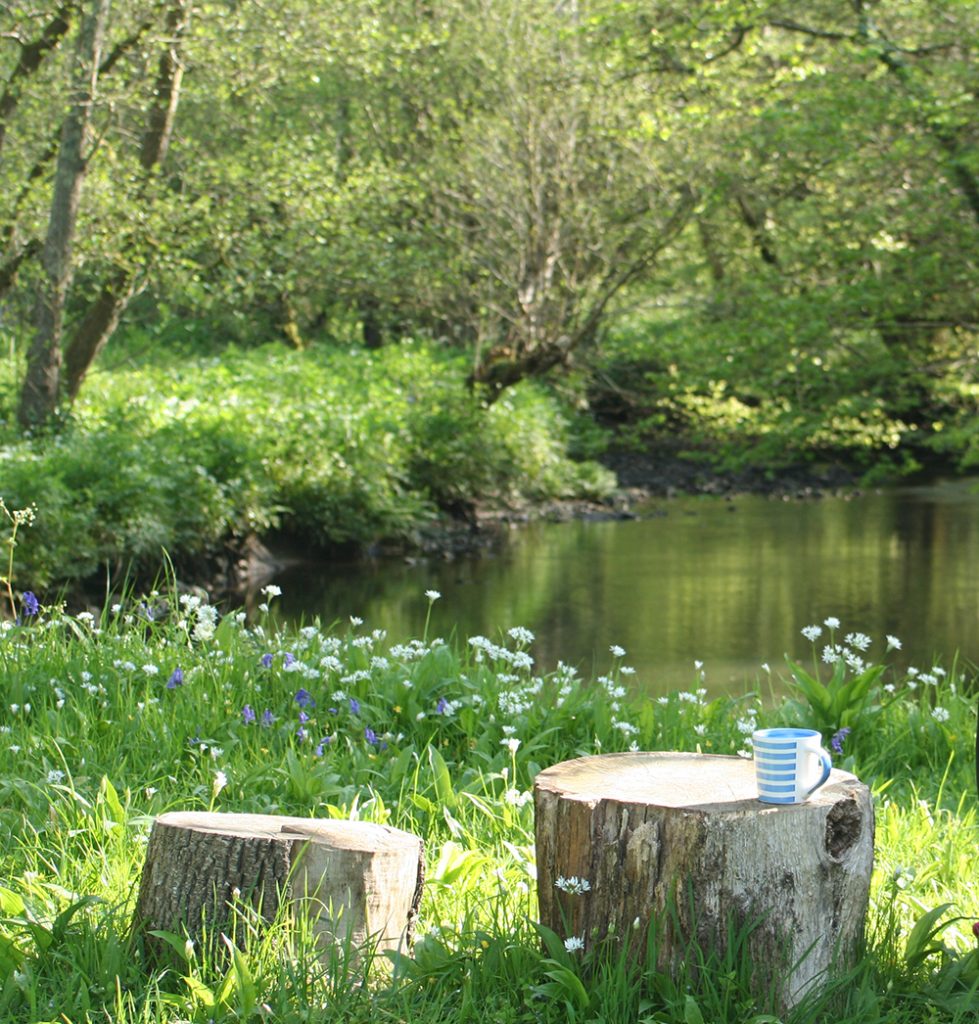 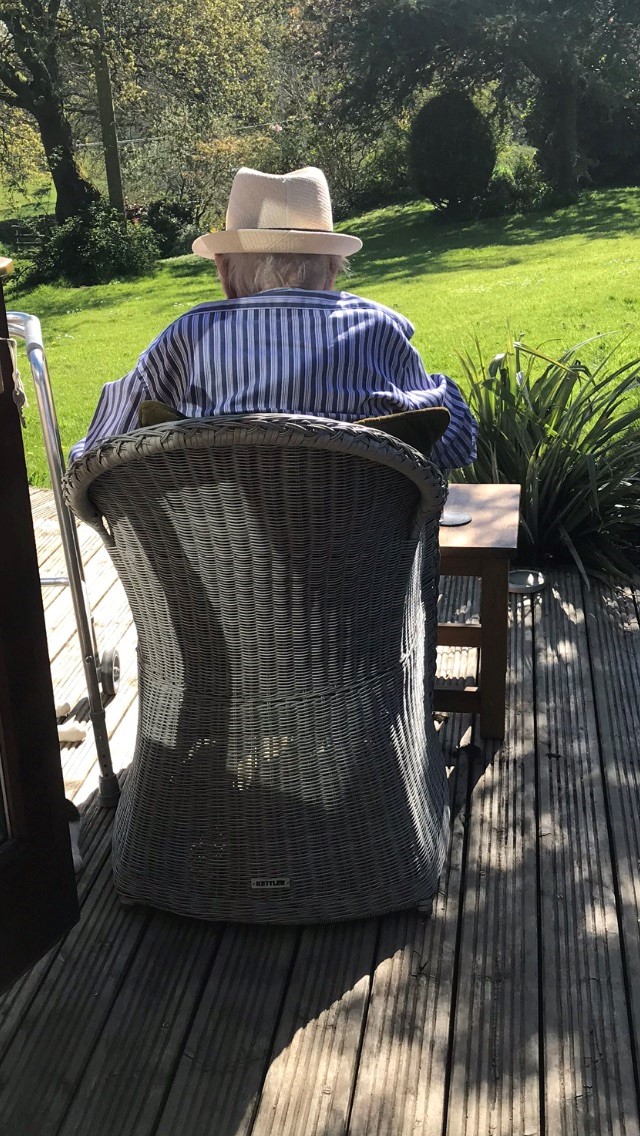 Pops enjoying the sun and seeing the garden flowers grow. 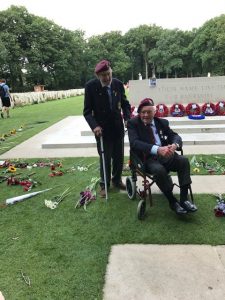 Pops and Des at Oosterbeek Cemetery, remembering colleagues who did not return. 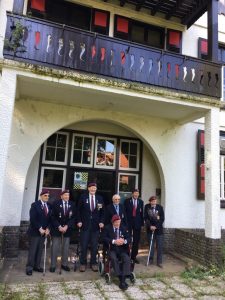 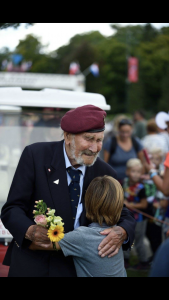 Apreciating the good wishes from everyone in Arnhem 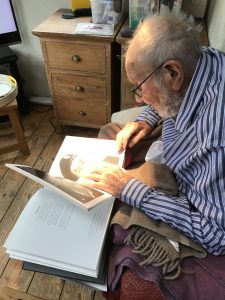 Finding a picture of yourself in a history book 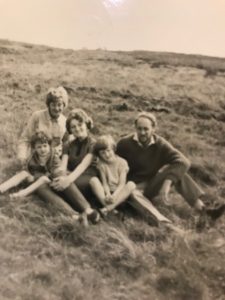 Pops with his family in the Preseli Mountains 1967 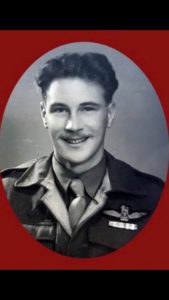 Pops as a young glider pilot 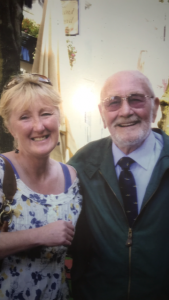 Fiona and Pops on their first trip to Arnhem where Pops served as a glider pilot in the Army Air Corps. 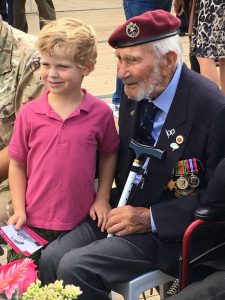 Pops with Florian, who visited Cresswell with his parents to celebrate Pops 95th birthday. 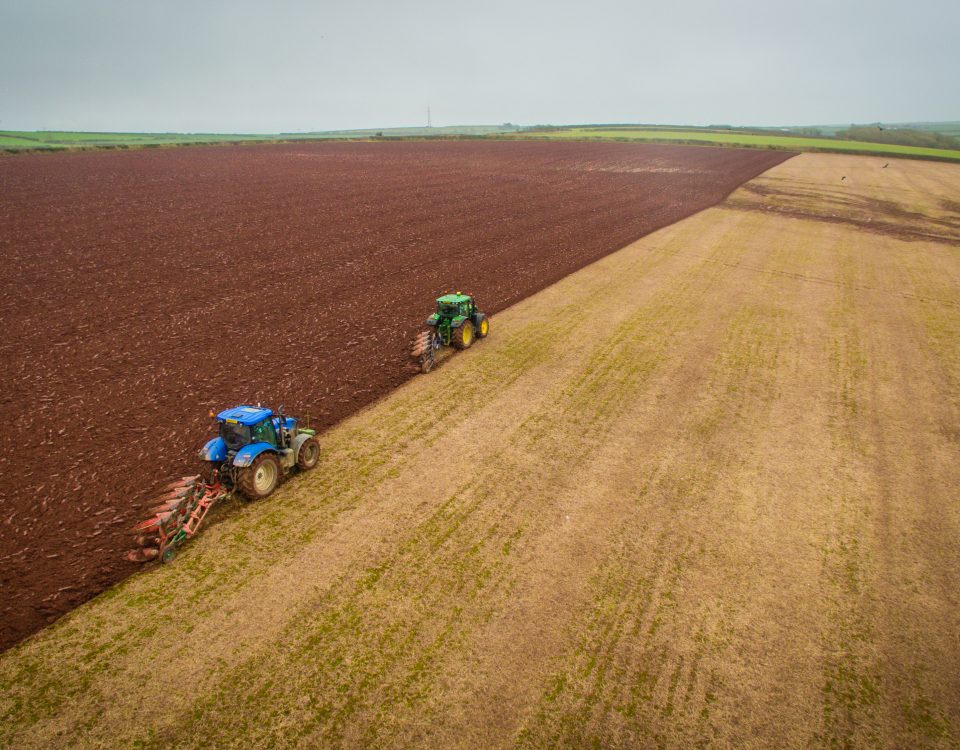